By mywalkgear on March 1, 2019 in Multiple Sclerosis 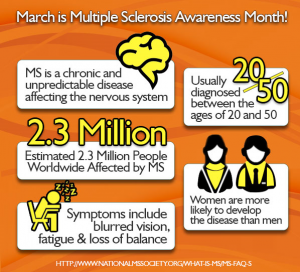 Every March is Multiple Sclerosis Awareness Month, a time to show your support for everyone whose life is impacted by this disease. MS is still without a cure, and it can be unpredictable and debilitating to those who face it. Sadly, scientists don’t fully comprehend all of the mysteries of MS, making the path toward a cure uncertain at the moment. This month, do what you can to educate yourself about MS and help contribute to the cause for those who are battling it.

Believed to affect about 2.3 million people across the globe, MS typically sets in between the ages of 20 and 50, though it can also arise well outside that range. Sadly, the cost of MS is very high as well. A 2016 report found that the average annual healthcare cost for someone living with MS ranges from $30,000 to $100,000.

Doctors believe MS involves the immune system incorrectly attacking healthy cells within the Central Nervous System. This means that the effects are fairly extensive within the body. Along with this, there is a wide range of varying symptoms and severity and frequency of those symptoms for those who are battling MS. Common symptoms experienced are fatigue, vision and hearing impairment, limb numbness and discomfort, and difficulties with mobility.

There are four types of MS. Clinically isolated syndrome (CIS) involves suffering one course of MS symptoms. These individuals are likely to develop a different form of the disease later on, but this doesn’t occur in all cases. The most common initial MS diagnosis is relapsing-remitting MS (RRMS), in which symptoms appear, then improve or disappear for a period of time before relapsing and starting the cycle over again. This unpredictable pattern can make it hard to nail down a proper diagnosis. People who have RRMS may later be diagnosed with secondary progressive MS (SPMS), which indicates a progression to the point where there are fewer, if any, relapse periods. The final type, primary-progressive MS (PPMS), includes symptoms presenting and gradually worsening over time with no periods of remission.

The current thinking is that MS arises from a combination of genetic and environmental factors, but it is a very tricky disease to diagnose. Since there is no surefire laboratory test to identify the disease, someone may suffer for years without knowing why. Numerous factors impact one’s odds of developing MS. For example, women are two to three times more likely than men to have MS. The disease is also more common in colder climates. For instance, MS is twice as common in northern U.S. states compared to southern states. People with Northern European ancestry tend to be the most susceptible. Family history also plays a role: those who have a parent or sibling with MS will face a greater chance of developing it themselves.

The difficulties in diagnosing MS also make it very difficult to treat. Until doctors are able to correctly identify the pathology of MS, a cure is unlikely to be found. While current treatments have seen some success in lessening the symptoms of MS, a full-fledged cure has not yet been discovered.

The Need for Awareness

The mystery that surrounds MS is part of the reason why it is so important to raise awareness of this disease and raise funds for research into a cure. By participating in events such as walks and fundraisers, and donning awareness gear, you can help to keep people informed about the symptoms of MS and its treatments. Showing your support for those suffering from MS can also be very helpful as they fight this chronic condition.

Since some aspects of MS are not fully understood, a diagnosis can feel very scary and isolating. Having a helpful support system in place can bring a sense of positivity that can aid in the fight. Thank you for reading. We hope this post provided you with some knowledge that you can spread to your friends and loved ones.